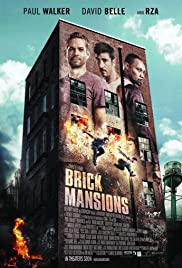 In a dystopian Detroit, grand houses that once housed the wealthy are now homes of the city’s most-dangerous criminals. Surrounding the area is a giant wall to keep the rest of Detroit safe. For undercover cop Damien Collier, every day is a battle against corruption as he struggles to bring his father’s killer, Tremaine, to justice. Meanwhile, Damien and an ex-con named Lino work together to save the city from a plot to destroy it.